The difference between prejudice and discrimination

Despite the steps taken to reduce prejudice and discrimination on the part of society, they are still widespread all over the world. This can cause a lot of difficulties and suffering to an individual or an entire group, which leads to limited opportunities for people belonging to this group, and even violence.

Due to a number of similarities between these two concepts, people often mistake prejudice for discrimination, but these are two very different concepts. Prejudice is a preconceived opinion without any information or reason, while discrimination refers to the unfair treatment of different categories of people on various grounds, such as age, race, gender, religious beliefs, and so on.

The term “prejudice” means bias, that is, an irrational opinion, thought or feeling formed about a person or group in advance without sufficient knowledge, facts or reasons. Prejudice can be positive or negative. However, this term is mainly used to denote negative biases in which members belonging to a certain group are considered inferior based on race, gender, nationality, ethnicity, class, religion.

“Discrimination” means unequal treatment of a person because of his/her belonging to a certain group or having some other character trait. Most often, people are discriminated against on the basis of age, gender, height, weight, skin color, illness, disability, marital status, education, speech, clothing, socio-economic status, and so on.

Key differences between prejudice and discrimination:

Examples of these two concepts in modern society:

To sum up, prejudice means holding opinions about someone without knowing the facts or evidence. These are the inner thoughts and feelings of a person, which do not always lead to action. Unlike discrimination, which means unequal treatment or different treatment of people based on individual feelings and preferences, which is very obvious. This is antisocial behavior, present in almost all countries, which can cause stress and tension among various groups, and can also lead to harm to the group it is aimed at. Actual
The Legal Policy Research Center (LPRC) team is pleased to announce a call for a workshop on “Peculiarities of Discrimination Protection Cases. National and International Instruments”, which will take place on February 3, 2022.
Actual
The team of the Legal Policy Research Centre (LPRC) held a workshop for media representatives on the topic “How to cover issues related to discrimination”.
News
The difference between prejudice and discrimination 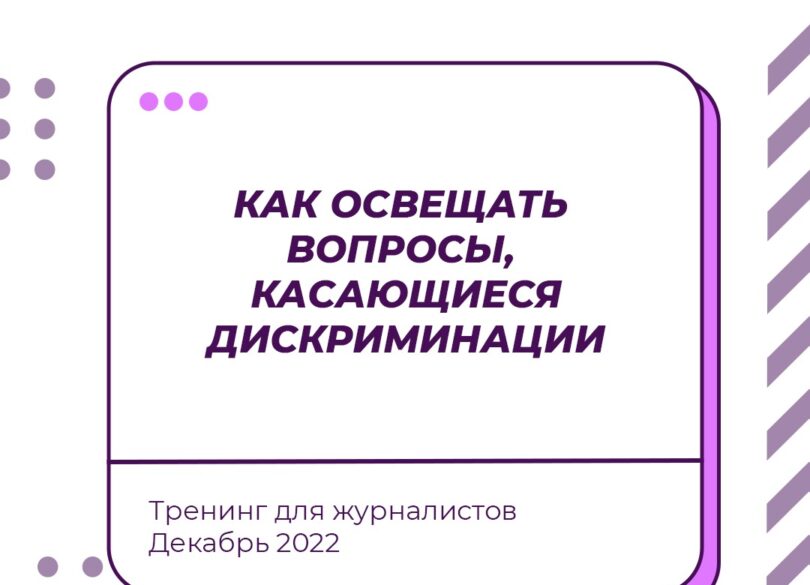 Actual
How to cover issues related to discrimination. Training for journalists